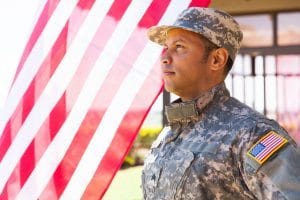 This is the next post in my series discussing issues which military members must deal with during a Las Vegas divorce. My previous post explained why it is important for a custodial parent to designate a guardian during times when one is deployed. In this article I will discuss an issue that is a concern to many military persons – what will happen to their pension during a divorce.

One’s military pension is the money that one will be awarded on an ongoing basis once their service to the United States military is complete. When a couple is married this money is intended to be a retirement that will support the entire family. When a couple gets divorced the spouse’s rights to a portion of the future pension is protected by the Uniformed Services Former Spouses Protection Act. The details of this act are complicated but it essentially ensures that the portion of the military pension that accrues during the course of the marriage is considered community property by the courts. However, there are several different ways a military pension can be divided. The option that a couple negotiates during a divorce may depend on several factors including the length of the marriage and the individual’s future goals.

There are essentially four ways a military pension may be divided – by a set dollar, a percentage amount, an amount based on a specific formula, or the amount determined can be delayed until the pension has matured fully. The most common way a pension is divided is by the use of the military’s formula that divides the number of service years during a marriage and divides it by the total number of years the member will be in service. If spouses decide to use this formula, the civilian spouse would not receive any pension money until it is awarded to the service member at the end of his or her military service. This is often the best option for couples who have been married a long time, and when the military member could not afford to make a one time payout.

A second option is that the spouses may agree that the service member will pay the civilian spouse a single lump sum at the conclusion of the divorce, based either on an agreed upon dollar amount or percentage of the accrued pension. This may be advantageous for a couple whom were not married very long, do not have children, and wish to have a clean break from the marriage.

Finally, the civilian spouse could choose to relinquish the rights to one’s pension in lieu of another asset that is deemed equal to that pension portion. For example, a spouse may agree to waive one’s rights to a pension in order to keep the house, a 401(k), some other retirement plan, etc.

The ways in which a military pension can be divided are complicated, but couples have several options depending on their specific finances. During a divorce, it is important to consult with an attorney who is familiar with the options available. Contact my office to speak with a Las Vegas divorce lawyer.