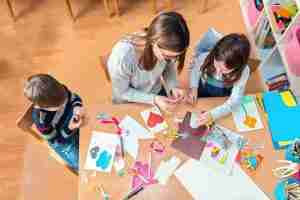 This is the next post in my series providing tips for Las Vegas parents who spend time with their children primarily during weekend visitations. My last post explained why it is important for parents to consistently stick to a visitation schedule. In this article I will explain why enforcing the same rules and schedules during the weekend that the children are expected to follow during the week is in the children’s best interest.

Many Las Vegas parents struggle with feelings of guilt related to not being able to see their children more frequently. As a result it can be tempting to let your children stay up late, eat ice cream for dinner, and go on shopping sprees for new toys every time they visit. Non-custodial parents often feel they have to “make it up” to their children by being the “fun” parent. However, allowing your children to indulge every weekend is not good for them in the long run. Children function far better with rules and routines. While they may enjoy “fun” weekends with their non-custodial parent they will respect their parent more and function better in the long run if their schedules are kept normal.

It is highly recommended that the non-custodial parent attempt to keep the children’s routine as close to “normal” as possible during weekends. This means having a bedtime that is not drastically different from what they have during the week, making them eat their vegetables, perform small chores, work on homework, and respect others. It is important to establish that the non-custodial parent’s home is a second home and not a vacation get-away. This means that rules must be followed and children must still complete their age appropriate responsibilities. Children can get confused when two parents are not on the same page about rules and schedules. They often attempt to neglect the household rules when they go back to their custodial parents home, may be more likely to push boundaries, or will be more likely to attempt to manipulate parents. If two parents are not on the same page about rules then the children will most likely find a way to exploit this lack of communication to their benefit.

It is best if two parents can work together, when possible, to set rules for the children which apply to both homes. For example, two parents may agree that children can have a slightly later bedtime during the weekend than during the week. Or parents may agree that the children are allowed to have an extra dessert or sweet on non-school days. But it is important to reinforce to children that both parents are on the same page and that both households adhere to the same set of rules. This will make transitioning easier for the children and reduce the number of temper tantrums that the parents will have to endure.

If you have weekend visitation with your children and are struggling with how to manage the transition then it is always best to speak to your child’s parent. If a legal issue is preventing a smooth transition then a family law attorney may be able to help. Contact my office today to speak with a Las Vegas child custody lawyer.