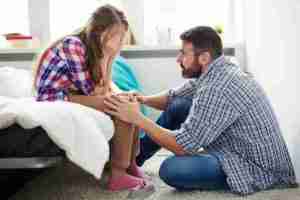 This is the fourth post in my series on summertime issues Las Vegas, Nevada parents often face when navigating child visitation schedules. My last post discussed how to handle a child who does not want to participate in the summer visitation schedule. This article discusses how to deal with visitation when your teenager has a history of behavioral and conduct problems.

Parents look forward to spending extended time with their children during the summer. Parents, however, can be quick to blame each other when a teenage child begins exhibiting behavioral problems after school is out for break. It is important for both parents to communicate and get on the same page if their teenager has a history of conduct problems. The parent with primary custody should be up front with the noncustodial parent about what the child’s problems have been, and what steps have been taken to address the issues. If the teenager has a set curfew at home, has lost privileges, or is required to take part in mental health or substance abuse programs, then it is important that these rules be continued during the visitation time. Teenagers will often attempt to manipulate the noncustodial parent into believing the primary custody parent is being unfair or overly punitive; choosing to believe your teenager over the adult is often a recipe for disaster. Attempting to be the “cool” parent will often result in learning first-hand what your ex has been dealing with full time. If you are aware that your child has behavioral issues, it is best to supervise them appropriately throughout the visit in order to avoid legal problems arising in Nevada’s Family Courts or, worse, the juvenile detention facility.

It is always stressful for parents when a teenager is displaying conduct issues. It is easy to cast blame on the parent who currently has custody, and teenagers often manipulate the situation when they can. When possible it is best for parents to stay out of court and handle the matter privately. However, if you believe that your teenager’s drug and conduct problems could be improved by a change of custody, filing early in the summer months is important. Contact a Las Vegas, Nevada child custody attorney today for assistance.