Grandparent Rights in Las Vegas When the Parent is Not Involved 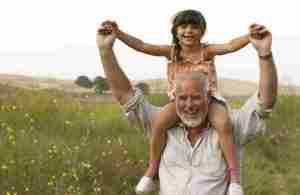 It is unfortunate, but sometimes a parent chooses not to be involved in the life of their child. This may be because they did not want to have a baby, they no longer get along with their child’s other parent, or they are not emotionally capable of being a good parent. It is common for grandparents to have not developed a strong relationship with their grandchild when the parent has been dominantly absent. If the other parent has been raising the child alone, and has not had close contact with the grandparents, then it will generally be that parent’s decision whether or not the grandparents are allowed in the children’s lives.

This can be devastating to a grandparent who wishes to get to know their grandchildren and does not want to be punished for any parental mistakes their adult son or daughter has made. However, with regards to the law, grandparents do not have many options. If the grandchildren’s parent does not wish for the children to get to know their extended family members then the law generally supports the biological parent’s decision. A Las Vegas Family Court Judge is unlikely to intervene unless a grandparent has an established close relationship with the grandchildren. Continuing to reach out to the grandchildren’s parent is often the course of action a grandparent can take in this type of situation. Avoid becoming angry or frustrated, and attempt to see the situation from their point of view. Take steps to mend any hurt feelings, and appeal to the best interest of the children involved. Children’s best interests are served when family members can get along and settle their differences outside of a courtroom. For many grandparents, patience and perseverance are the best course of action in developing a relationship with their grandchildren.

The exception to the above rule is if the grandparents suspect that the current parent taking care of the children is abusing them in some way. If abuse or neglect is present then the correct course of action is to file a report with Clark County Child Protective Services. CPS will launch an investigation. If abuse is present and it is determined that the children must be removed from the home then the State will seek to place the children with a close family member when possible. Grandparents who have a suitable living environment, do not have a criminal history of domestic violence or abuse, and who wish to take in the children may be eligible to apply for temporary guardianship. If the grandparents do not have a previous or close relationship with the grandchildren then such placement will be determined according to whether or not a more suitable option is available. If another set of grandparents exists, or another relative who has a closer relationship with the grandchildren, then the children will be placed with the family who is in the children’s best interest.

Being a grandparent who is not allowed to build a relationship with the grandchildren can be devastating. Unfortunately, a grandparent only has legal options in a limited set of circumstances. If you believe the law is on your side and you have a case to ask for visitation rights towards your grandchildren, contact our family law office today. Our office services the greater Las Vegas area.

Our firm is accepting clients during this time of difficulty for our community. We may be contacted online or by telephone. We are available for consultations via video conference or phone call.