The Differences Between Annulments And Divorces In Las Vegas, Nevada 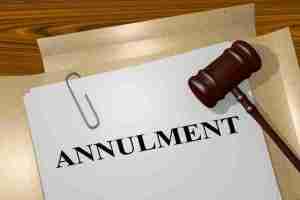 This is the next post in my series discussing annulments in Las Vegas, Nevada. The previous post highlighted the subjects to be addressed throughout this series. It also stressed the need to consult with an attorney experienced in family law when contemplating an annulment or divorce. In this article I will review the primary differences between annulments and divorces and how those differences may impact your case. If you are considering terminating a marital relationship, contact my office today to speak with a lawyer.

The most common way for a couple to end their marriage in Clark County is through a divorce. The divorce process can be contentious and time consuming, particularly when the parties disagree about their financial settlement or division of property. Depending upon the facts of each specific case, couples may engage in lengthy settlement negotiations or even proceed to trial in order to “unwind” the family’s affairs. Divorces conclude with a settlement agreement or court order that divides and distributes marital debts and assets between the spouses and may also result in one spouse paying alimony to the other. Although the marriage contract is terminated by virtue of the divorce, the effects of the financial division or support awards may impact the couple for a significant period of time after the case is over.

When a marriage is annulled, on the other hand, it is treated by the court as if the marriage never occurred. One can imagine the potential benefits of this distinction. For instance, if the couple was never actually married, they would not have any marital property or marital debts. Without joint assets or liabilities, the spouses would not be subject to the division and distribution of joint property as is the case in a divorce. The parties would simply revert to their premarital financial positions and property holdings. In addition, neither party would be obligated to pay spousal support or meet other financial responsibilities that may have resulted from a divorce.

Consider the following example. A couple meets during a trip to Las Vegas and decides to tie the knot on their visit. During the first few months of the marriage, the wife spends exorbitant amounts of money on clothing and jewelry for herself, resulting in thousands of dollars in credit card debt. The husband then learns that the wife fraudulently represented her citizenship status at the time they were married. He seeks an annulment of the marriage. Assuming the facts are sufficient to justify an annulment, the marriage would be considered void. The couple would not have incurred marital debt and the wife would be solely responsible for the liability going forward. If the couple is not eligible for an annulment, on the other hand, and must obtain an divorce, the court may consider the debt a marital obligation and equitably divide it between the husband and wife. Each case will, of course, depend upon the specific facts of the situation.

In light of the potential benefits of an annulment vs. a divorce, it is not surprising that couples prefer that option over a divorce. As I will discuss later in this series, however, annulments may only be granted in limited circumstances. A Las Vegas family attorney can help you understand if an annulment is an option for you. Contact my office today to consult with a lawyer.